In 2011 I made a mostly wooden robot sculpture with the sole idea of having him express a sense of melancholy.  Something about him made people wonder what his story was, or maybe try to imagine one.  I liked it so much that I made a companion piece to try to elaborate on that story.


The second one just wasn’t as good as the first; by trying to create a story I lost some of the character. It just wasn’t as much fun.  I let the idea of personified robots go.  As I was starting to plan new work for my 2014 show a close friend suggested that I try the robots again.  I went back to the original idea of conveying a sense of emotion and leaving the story open to interpretation.

I made roughly one robot a week for the next three months, and each new piece I liked better than the last.  That rarely happens for me; usually I’m content with about a third of my pieces and discard the rest.  Everywhere I looked I started seeing robot parts.  I picked up bits of metal off of the street and I disassembled perfectly good electronic devices.  It’s astounding what can be bought online; my eBay purchase history would send up a red flag to the FBI.  I bought a lot of broken time pieces and animal bones and tools involving fire.  When I couldn’t find a piece that suited my imagination I sculpted one from wax and cast it in my jewelry studio.

My robot show was unarguably the best body of work that I’d presented.  I’ve continued to make robots and they continue to increase in complexity as the craftsmanship improves.  They may not reflect the essence of the human condition or reveal some deep existential truth, but they continue to be a hell of a lot of fun, and to me that’s what art should be about. 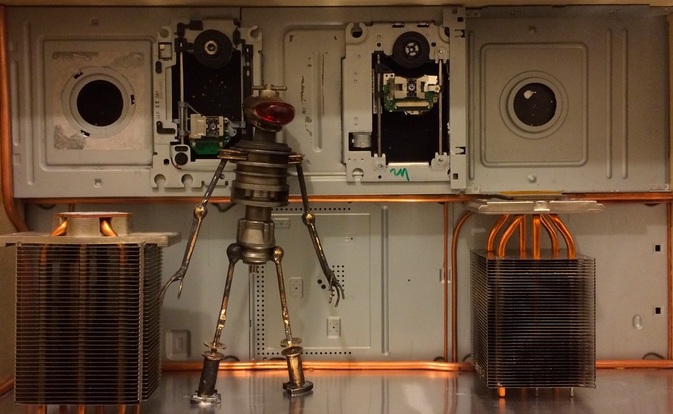